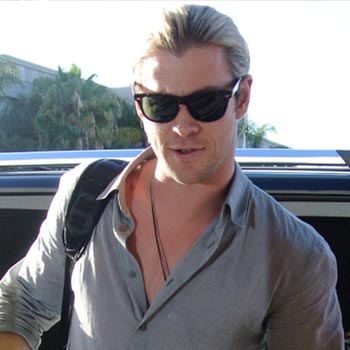 They're the stuff that dreams are made of. We're talking about Hollywood's hottest heartthrobs. Whether it's their captivating looks or their overall charisma, these are the guys that sell tickets and drive ratings. You'd be hard-pressed to find a woman who doesn't have a celebrity fantasy. But before you go feeling guilty over those good feelings, consider this -- these harmless daydreams can actually help, not hinder, your relationship. So says renowned sex expert Ian Kerner.

Kerner, the founder of goodinbed.com and numerous self-help books, tells the TODAY show: "Fantasies are a very normal part of sexuality. Having a celebrity crush is way better than fantasizing about a "real' person. It could be a good way to spice things up with your partner - if you have a good, trusting relationship. It's a great way to start a conversation with your partner around sex."

So long as these handsome hunks run a close second to the leading men in your life, it's all good. Now check out who makes MyDailyMoment's list of the most in-demand male celebs.

This is not the first list of sexy male celebs that Johnny Depp can find his name on, and it is likely not to be the last. Depp is beloved for numerous roles on the big screen, including his bad-boy movie persona in the Pirates of the Caribbean series. Now, in 2012, Johnny Depp joins a long line of sexy vampire actors (hello Robert Pattinson) with his new movie Dark Shadows. This is sure to make the sexy star an even hotter it.

Robert Pattinson, the man who started the vampire craze himself, can't be left off of any list of celebs who make women crazy. Pattinson captured the hearts of Twilight fans young and old, including Twilight moms and teens, when he took on the role of sexy-but-controlling Edward Cullen, despite his public commentary mocking the series.

Australian actor Chris Hemsworth is perhaps best known for his role in the 2011 film Thor, but also has several big-screen credits to his name in 2012 including The Avengers and The Cabin in the Woods. As if a starring role in the well-received movie The Avengers isn't enough, Chris Hemsworth has also been recently featured in tabloid presses hitting the streets of London with his baby daughter India Rose in a baby carrier on his chest. Nothing like a sexy family man to get women going.

Pitt's recent engagement to Angelina Jolie - along with the gorgeous ring he got her - has done nothing to reduce the sex appeal of this longtime hot male celeb. Pitt's film Killing Them Softly with Andrew Dominik is sure to be a crowd pleaser and is considered one of the most anticipated films of 2012. The crime drama is set in the American west and is based on the novel Cogan's Trade.

Zac Efron may have gotten his start on the Disney Channel, but today he is an undisputed movie star and a hot sex symbol for millions of women. Efron was recently in the feature film At Any Price, which was well-received at Cannes Film Festival and recently acquired for foreign distribution by Exclusive Media. The film features Efron as a man determined to become a race car driver at any price - including failing to live up to his obligations on his family's farm.

Continuing on with our list of 10 male celebrities who drive women crazy, we're down to the last 5 slots to fill. There are so many male celebs on the big and small screen that exude sex appeal that it is hard to pick just 10. Still, these 10 are top male movie stars and men who have been recognized over the world for their amazing looks and their ability to drive women wild.

Josh Holloway captured hearts and minds as Sawyer in the famous TV series Lost. Everyone loves a bad boy and Holloway did not disappoint as the troubled love interest in the love triangle completed by the characters of Jack and Kate. Recently, Holloway has moved to the big screen with the action flicks Mission: Impossible - Ghost Protocol­ and Battle of the Year: The Dream Team. His stunning sex appeal in movies continues to make him one of the hottest male celebs.

Oscar-nominated Jake Gyllenhaal has had a busy year already wrapping up his role as cop in the upcoming End of Watch. He is also scheduled to premiere this summer in an off-Broadway production at the Roundabout Theatre Company in New York called "If There is I Haven't Found it Yet." Rumors that he is hooking up with a Twilight Star have many women jealous as they admire his sexy and smoldering good looks.

Nadal proves that not every sexy celebrity has to be a movie star - his athletic prowess helps to drive plenty of women crazy. Nadal's moves on the tennis court and his rugged good looks make him a top fantasy figure to many women. If he manages to win a seventh French Open title this summer, his status as a sex symbol is sure to rise even higher.

While Will Smith has been out of the spotlight for several years, he's not out of the hearts and minds of women. For those who can't get enough of the former Fresh Prince of Bellaire, this sexy male celeb will soon be back on the big screen in the long-awaited Men in Black 3. His long and devoted marriage to Jada Pinkett is not in trouble though, according to a recent statement he made, despite rumors to the contrary. If it was, there would be many women in line willing to help pick up the pieces and provide comfort.

Unlike Smith's divorce rumors, Kutcher really did publicly split with his former love-interest Demi Moore. This public breakup has not dulled his sex appeal, however. Now, with rumors that Kutcher will be cast as Steve Jobs in an upcoming bio pic, the young actor will be given a chance to expand his film repertoire into a new sort of role if he stars as the charismatic entrepreneur.

Announcements have also been made that Kutcher will be back for another season of Two and a Half Men, giving women the chance to see him on both big screen and small.