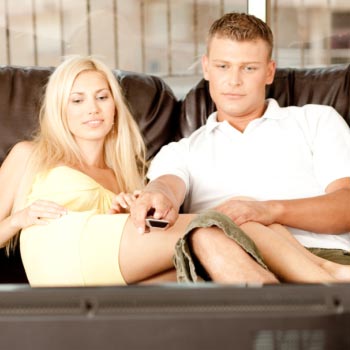 When it comes to steamy flicks to get us in the mood, having an in-depth story line definitely helps, anything to give that emotional connection. Then again, if you're looking for a film that gets both going, you don't want anything that is borderline sappy chick-flick.

It's a fine balance, finding a movie that will appeal to his basic instincts and your need to connect and stimulate all senses. Luckily, some of the major movie studios haven't let us down. There's a little bit of something for everyone here, with some tempting options spanning the '80s, '90s, and 2000s. Here's our take on the top 4 hottest movies to get you going.

What it's About: When Emily accepts a job with an international law firm, it comes with 1 condition: She must be able to fly out the next day to Rio de Janeiro to help the firm's top executive, Claudia, close the sale of a hotel. A turn of events pulls Claudia away to Buenos Aires, and Emily is encouraged to take her boss' date, James Wheeler, for the night.


Emily is instantly drawn to Wheeler's quiet and intriguing personality. After a slew of sexual encounters (including one with a masked stranger at Carnival and heated conversation with Claudia and a surfer in their hotel room) the sexual tension Emily feels for Wheeler comes to a breaking point.

Why it's Hot: The scent of wild orchids like the ones Wheeler gave Emily can all at once be both overwhelming but beautiful, much like the intoxicating cloud that seems to envelope the setting for this movie with lustful undertones.

Add the steaminess of Rio with the intrigue of Carnival and the allure of Mickey Rourke (in 1989, pre-surgery of course) and it's no wonder that Emily was swept along on a wave of lust and desire that even she couldn't seem to control.

Tasty Tidbit: The original cut was edited to be suitable for an R-rating. Look for the uncut version, with a love scene between Claudia and Wheeler that is rumored to this day to be more than merely acting.

What it's About: This mid-80s flick could be described as borderline "S&M in the City." A chance meeting at a Chinese grocery store in New York City is the location where their eyes first locked. And then, as luck would have it, Elizabeth (played by Kim Basinger), a Soho art gallery assistant, and John, a commodities broker, meet again at a local flea market.


This time, John presents her with a stole, and after taking her back to his houseboat, offers an experimental sexual relationship. She accepts, and in the weeks that follow, Elizabeth is swept up in the eroticism. As the sexual journey unfolds, the movie comes to an unexpected conclusion.

Why it's Hot: In everyday life, it seems there is a routine, a familiarity with relationships and intimacy. From the start, Elizabeth and John do not follow the traditional path of romance. After all, John blindfolds her during one of their first sexual encounters - a foreshadowing of what is to come.

As the movie unfolds, John calls Elizabeth at random times, encourages her to experiment with her sexuality, pushing her to the brink of her limits. As the two fall deeper into their sexual obsession, Elizabeth spends her workdays in a haze, perhaps partly from lust and partly from lack of sleep.

Once again, it doesn't hurt that John is played by a 1980s Mickey Rourke, the decade's hottest commodity.

Tasty Tidbit: One scene to watch for is when John blindfolds Elizabeth and feeds her an array of foods, tantalizing the senses. Want to see what makes this scene perhaps the most talked about from the entire film? You'll have to watch and find out.

What it's About: This movie has some of the most alluring facets of a Hollywood film. It has a little rock 'n roll, mixed with murder and of course - sex. The stage is set with the murder of rocker Johnny Boz. When San Francisco detective Nick Curran (Michael Douglas) is assigned to the case, he immediately suspects crime novelist Catherine Trammel (Sharon Stone) and, coincidentally, Boz's girlfriend viciously killed him. The murder weapon: an ice pick.

Interrogating her turns out to be harder than he could have imagined. Catherine is not only intense and seductive, she's also clever. What follows next is a mind game first fueled by lust and then lived out in wild sexual forays the likes Curran has never experienced.

Why it's Hot: Nick and Catherine's relationship begins as a cat-and-mouse game of sorts. The mind games build anticipation for the torrid sexual relationship to follow. Mixed in is a sense of danger. Catherine says she'll base her next novel's main character on a cop who falls in love with a woman who eventually kills him. This flick is truly a thriller with explicit sex scenes thrown in, for good measure.

Tasty tidbit: Director Paul Verhoeven must have done something right, because the thriller turned out to be one of the top grossing films of the 90s, raking in more than $350 million. The original version was originally rated NC-17, but after cutting nearly a minute of explicit sex scenes, it was dropped back down to its mainstream R-rating. If you want to see the film in its entirety, look for the director's cut.

What it's About: Meet Lee, a subdued young woman who has just gotten out of a mental hospital for her masochistic habits and returned home to Florida. She takes a job as a secretary at Edward Grey's law firm. Edward has a unique management style. Typos and other office errors call for a firm spanking, where Lee must place both hands on the desk while he hits her lightly until her skin is reddened.

While this may sound borderline abusive (not to mention violating all sorts of sexual harassment laws), it's presented in a deliciously fun way as Lee begins to crave her boss' hard hand of discipline. As she begins to purposely fail just to receive more spankings, sexual fantasies ensue.

Why it's Hot: This quirky play on the secretary-boss stereotype takes the notion of dominance and submission role-playing to the extreme. While we tend to stray from an attitude of subservience in our everyday lives, this film has fun with the concept in a purely sexual way.

Throughout most of the film, Edward and Lee don't actually have sex, but instead fantasies build the anticipation. It doesn't hurt that Edward is played by James Spader, already known for his TV role as a charming, quick-witted lawyer, and that Lee (Maggie Gyllenhaal) appears so sweet on the surface but is ready to do most anything - no matter how deranged - to get sexual release.