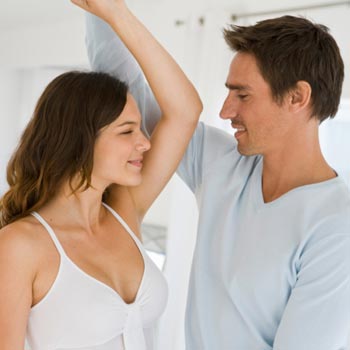 At the beginning of a relationship, everything is hot. You're exploring each other's bodies, wants and needs for the first time, and it's exciting. He wants you all the time, in every position possible and in every location of the house (maybe even out in public!) Let's just say you're not complaining about it.

Too bad nothing lasts forever - not even those steamy sexcapades.{relatedarticles}

Once the newness wears off, your sex life just isn't the same. Your man is either out with the boys or glued to the television. It often feels like he doesn't have the time of day - or night -- for you or your needs.

But all is not lost. There are ways to turn up the heat when he's turned into a cold fish. The trick is to make him want you more than that beer with his bros. When you're lacking inspiration, look to these eight effective ways to get him going.


Wake Him Up with Sexiness

Guys are notorious for waking ready and raring to go. Work this to your advantage. Set your alarm a few minutes earlier than your man's, slip out of your nightie and wake him up with a little sexiness.

Crawl under the covers and snuggle up to him so he feels your lack of clothing. Kiss him gently, and whisper sexy ideas in his ear. You'll have him fully awake and alert in no time! He'll love your spontaneity, and you'll help him kick his day off to a great start!{relatedarticles}

Sneak in the Shower with Him

While he's sudsing up in the morning, quietly sneak in the bathroom and slip off your clothes. Pull the curtain back slightly, and sneak in while he's turned the other direction. Wrap your arms around him from behind and start kissing his neck.

You'll startle, excite and turn him on all at the same time. And -- big bonus -- the shower makes for easy cleanup after you're done!

If you've got moves, show them off! Turn undressing into a slow and sexy striptease. One button at a time, start to remove your clothing piece by piece and give him just a little peek of what's to come. Turn on some smooth jazz or R&B to really amp up the mood.

He'll be on edge waiting for that last piece of clothing to disappear but it's doubtful he'll be able to wait that long. He'll be ripe for the picking in just minutes!

Every man loves a cowgirl, right? Forget the standard missionary position; it's time for you to get on top. Saddle up and ride your guy like a pony. Yell "yee haw" and pretend your lassoing cow-poke if you have to; just do whatever you need to do to get in the moment.{relatedarticles}

In addition to not having to do all the work, your man will love your take-charge attitude, and you'll both find pleasure in the exciting position!

Sometimes, guys get tired of being in charge. Making all the moves can get exhausting and tiresome; that's when it's your turn to take on the boss role.

Take charge of the intimate times with your man. Tell him what you want him to do to you, where you want him to do it, and how hard. Be blunt and direct. You'll command respect and look hot doing it. Your man won't be anything but turned on by your new boss-lady persona!

We all know: guys want sex. So why give them what they want so easily?

Play hard to get. Make your man tell you what he wants you to do, and make him beg for it. Then make sure he tells you what you'll get in return. He needs to make you a deal you can't refuse and get down on his knees to do it!{relatedarticles}

Don't just give it all up for a simple "please." It's a win-win for both of you, and your man will be super turned on by your take-charge attitude.

Anyone can whisper "I love you" in someone's ear during sex. If you really want to turn your man on, though, you need to push the envelope a little more.

Sexily tell your partner your deepest fantasies: what you want him to do, and where you want it done. Make demands, give him direction and use those naughty words you were taught not to use as a kid. They'll shock him, turn him on and make him want you all at once.

Don't be afraid to be blunt or crude. In the heat of the moment, your man will welcome the sexy surprise.{relatedarticles}

There's nothing a guy wants more than what he can't have. It's like the little kid in the playroom; he has to have the same toy that someone else is already playing with. You just have to learn to translate this to the bedroom.


So put on your sexiest dress, curl your hair and cuddle up real close to him on the couch. As soon as he clues into your strong signals, let the teasing begin. Be coy, don't give up kisses too easily and make him work for it! You could have any guy you want, right? He needs to show you why he's the one you should be with tonight!{relatedarticles}

This will drive him crazy. Just a few minutes in, he'll want you so bad he can't stand it. Prepare for major ravaging! If you've hit a standstill in your love life, try some of these tips out to reignite the spark. They won't just keep him in your life; they'll keep you satisfied, too!