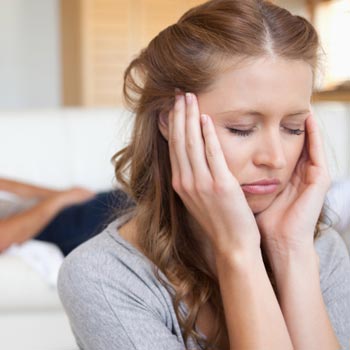 Boys will be boys.

Unfortunately, that can add up to one big headache for many women. Even the best guys have their flaws and habits that drive us up the wall; however, most man-mistakes aren't made purely to piss you off. We decode some of guys most mystifying and irritating behaviors.

Saying "I don't care" or "Whatever you think" every time you ask him for an opinion or decision.

Does your man go mute when you ask him how you look or get the deer in the headlights stare every time you talk about marriage? Don't write him off as uninterested or insensitive just yet. When guys aren't sure what you want they're afraid to say the wrong thing and would rather clam up than start a fight. The more comfortable you make him with sharing his thoughts and feelings, the more he will.

It's also important to communicate clearly to him your needs and wants so that he can understand your feelings. By relating to where you are coming from, he will be better able to engage in a dialogue. If you have been dating for several months and he still doesn't speak up when you prompt him, you need to have a discussion about what's going on.

After a big blowout when you can cut the tension with a knife, you might be thinking "this could all be over if he would just apologize" - but he doesn't budge. Even in the most PC times, many men have a hard time letting a woman get the last word. Most guys grew up in households seeing their fathers, grandfathers, and other men never apologize to the women in their lives. You can either suck it up and learn to accept his lack of progress or calmly explain to him that you are both equals in this relationship and that saying sorry doesn't emasculate him in any way.

He always wants sex at the worst times.

Men typically think of sex as a cure-all for any situation even an emotional one. They assume you will feel the same way. Just got laid off? Sex will take your mind of that. Having a fight with your best friend? Let's have sex to blow off that steam. It may seem like he's acting selfish, but he is only trying to help you the way he knows how. You can let him down gently and promise him a night of passion once your mood has passed or you can give it a chance to see if it actually works.

He acts distant or mean to you when his friends are around.

When you spend time alone together your man may seem like the sweetest in the world, but when it comes to hanging with his crew he might act like he barely knows you. This typically goes back to the male-ego problem. Having his friends see him stroking your hair, holding your purse while you go to the bathroom, or blowing you a kiss from across the bar can totally blow his manly street cred. Either play it cool or skip the group hangouts altogether.


He remembers the score of a basketball game three years ago but can't remember anything you talked about yesterday.

He always gets defensive when you say something negative about his mother.

As the first woman in their lives, moms will always hold a special place in a man's heart. Even if she's acting terribly, it will be hard for him to hear you talk badly about the woman who raised him. Your best bet is to grin and bare it and if you must broach the "mom" subject do so very, very carefully and gracefully.

Your man might come off cold or uninterested when meeting your gal pals but that's because he may not be able to keep them all straight. Guys tend to have a long-standing solid group of a few friends, whereas women probably have lots of separate social groups like college friends, co-workers, family friends, etc. He may not understand your level of commitment to each group so he isn't sure how friendly or invested he should get.


When you ignore him, he calls all the time but when you act interested he suddenly wants nothing to do with you.

This can be one of the most frustrating issues a woman can experience when dealing with a man and it can make you feel downright crazy, but there is a reason why. When you are not paying attention to a guy by doing your own thing and living your life you come off as confident but the minute you offer a man your attention his brain switches to a mode that makes him feel trapped.

This can be blamed on biology as men have innate need to show or signal to others that he is still available to procreate at a moment's notice. Some guys are better at controlling this than others and if you can't seem to get him to settle down after a few tries - move on. {relatedarticles}

So the next time you're grumbling and cursing him under your breath asking "WHY does he do that?!" you can turn to this guide to figure it out. Remember that just like you aren't perfect - neither is he. Rather than ignoring it, hoping he will change on his own, the best to way to tackle these issues is to keep an open mind and line of communication.