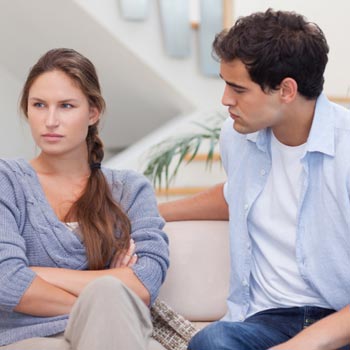 Our founding fathers understood that freedom is an essential part of human happiness and their words can be taken as excellent dating advice.

While most of us value our freedom in everyday life, sometimes we can lose sight of it in the context of a romantic relationship. Excessive control is one of the most common relationship complaints -- and one of the top reasons cited for the demise of a romance.

When a woman first meets a man, she may not notice his domineering tendencies. Often, the watered-down version of his controlling traits is what she'll be exposed to first, and ironically, these can be pretty appealing in a man.{relatedarticles}

In many ways, he can come off as the "perfect" guy: protective, decisive and utterly devoted to her. However, in time, she may begin to notice behavior that crosses the line from chivalrous to downright domineering.

Of course, controlling behavior isn't always incurable; there are ways to address this issue if both partners are willing to confront it and take steps to deal with it. The first step is recognizing that a problem exists. The following is a quick checklist of signs that your guy might be controlling.


Controlling Behavior: Why it Exists and What to Do About It

Sometimes, people just have dominant personalities and don't learn how to give in and share power with others. In other cases, fear and insecurity is at the root of a controlling nature. The latter can be especially difficult to address because insecurity and fear can wreak havoc on a relationship.{relatedarticles}

He will tell you that his emotional outburst is because his ex cheated on him with half the guys in town/spent all his money/was mean to him/insert bad behavior here. Whether this is true or not, it doesn't mean he can use it as an excuse or that you should use it as an excuse for him.


As long as you're looking at your significant other in a realistic light, take the time to look at yourself in the same way. Is there anything you do that enables his controlling behavior?

Many relationships in which excessive control is an issue are actually mutually controlling. People with similar psychological traits often gravitate to one another. Take a look at your own behavior and ask yourself whether you may also be letting insecurities and fears take over your relationship.

Or on the flip side, if you sit back and let him take the reins in most matters just to avoid having to deal with things yourself, he will feel that you're OK with him being in the driver's seat all the time.{relatedarticles}

There are ways to handle a controlling partner, but it's rarely an easy undertaking. If your relationship is far enough along that you're committed to each other and the controlling person admits to the problem, you can set some goals and limits together.

For example, discuss how you'd like more autonomy in decision-making and set a schedule to take turns deciding what activities you'll do as a couple.

For insecure/jealous partners, you may need to set some strong boundary lines when it comes to personal space. If you don't, the behavior will continue unchecked. Unfortunately, your demand for increased privacy will probably just reinforce his fear that you are indeed seeking outside relationships.


In many cases, these issues respond better to couples' therapy. A therapist can help you both work through the problems and can give you a course of therapy designed specifically for the 2 of you.

If the relationship is in its early stages and you're not in too deep, your best course of action might simply be to end it. You can talk with him first and see if things improve, but be realistic. You won't do yourself or your man any favors by allowing things to progress when you can already see the warning signs of failure.{relatedarticles}

Leaving a controlling partner is even more difficult when you've been together long enough to share bank accounts and children, so bailing early sometimes can be the smartest course of action.

Abuse is the most important reason to leave a controlling partner. Not all controlling men are violent, but excessive, one-sided control is a prominent feature in the clinical description of an abusive relationship. If your partner shows signs of violence toward you, and that includes frequent vicious verbal attacks, you need to seek help and leave the relationship for the sake of your own safety.