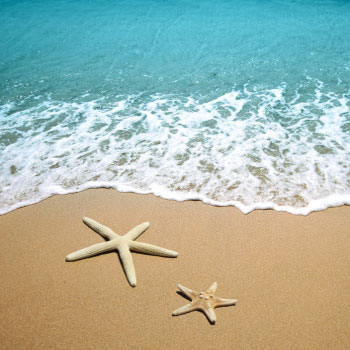 Is it hot in here or is it just them? From long and lean to perfectly proportioned curves, these 10 famous ladies demonstrate that hot celebrity bikini bodies come in all shapes and sizes. 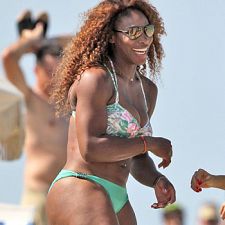 Game, set, match: Tennis great Serena Williams serves up a hot, toned physique that's built for fun in the sun. While it's hard to choose just one standout feature from her overall athletic build, her washboard abs rank high on the list. {relatedarticles}

To get her signature look, Williams, who has worked with fitness companies that include Nike Training Club and others, focuses on core and abdominal work. Some of her go-to tools include the stability ball and resistance bands. Williams credits her hard-as-a-rock core for helping her power through strong sets on the court. The bikini-ready bod? That's just bonus points. 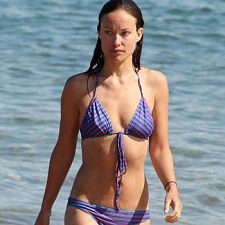 Actress Olivia Wilde proved she can rock a skin-tight catsuit in Tron: Legacy. If her vacation photos are any indication, she looks just as great in a teeny-tiny bikini. The former House M.D. star recently snagged the title of “hottest female beach body” from E-Score, which determined the winner via nationwide survey. {relatedarticles}

The screen stunner maintains her physique with regular exercise, including Pilates, spinning, cardio and even Capoeira, a Brazilian form of martial arts. To top it off, she eats a clean, vegan diet. Not to mention being blessed with other-worldly genes. She's the quintessential girl next door. At least, for those who happen to live next door to an internationally renowned bikini goddess. The curvy blond nabbed back-to-back covers of the annual Sports Illustrated Swimsuit Issue (in 2012 and 2013) and has appeared on dozens of “hottest women” lists in a variety of publications. {relatedarticles}

Best known for her considerable – ahem – assets and fresh face, Upton has built a successful reputation in the swimsuit modeling industry. Not to be typecast in two-pieces, Upton branched out in mid-2013, gracing the cover of none other than high-fashion bible Vogue. 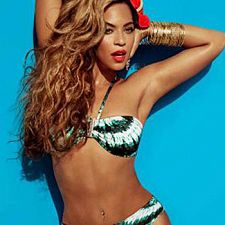 She sings, she dances, she looks seriously hot in a bikini – it's all in a day's work for the voluptuous and inimitable Beyoncé. The fierce superstar served as the face – and bikini-clad body – for the 2013 summer campaign for global retailer H&M. Though the chain initially tried to use doctored photos showing a slimmed-down Beyoncé, the diva got her way, and the final pics appeared in all their curvaceous glory. {relatedarticles}

With her strong body and equally compelling persona, Beyoncé is a force with which to be reckoned, whether she's lounging by the pool in a tropical-print two-piece or hitting the stage in platforms and hot shorts. She got her start playing a genetically manufactured superhuman, so is it any wonder Jessica Alba is still making waves with her hot bikini body? The former Dark Angel star is a busy working mom but still makes time to work in a regular fitness regimen.{relatedarticles}Alba's personal trainer credits the calorie-scorching burpee for helping her stay in shape, while Alba herself has copped to interval training on the treadmill to keep from getting bored while staying hot. 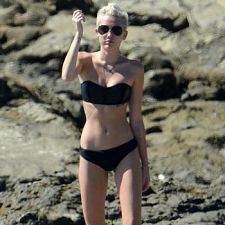 Hannah Montana no more, Miley Cyrus has come into her own and is turning heads everywhere she goes. This spring, the former Disney darling landed the #1 spot on Maxim's 2013 Hot 100 list. Her edgy new look – complete with teeny black bikinis and slinky jumpsuits – is miles from her clean-cut tween persona.{relatedarticles}

The singer credits a gluten-free diet with helping her rock her killer new bikini body. In addition to the diet regimen, Cyrus keeps fit by dancing, regularly practicing Pilates, hiking and biking. Rihanna seems to come from the “If you've got it, flaunt it” camp, and that's just fine by most. The Instagram junkie is known to upload selfies frequently, showing off her trim physique in a variety of skimpy swimwear. {relatedarticles}

The Barbadian beauty looks perfectly at home lounging poolside and oceanside, giving the paparazzi plenty of opportunities to snap pics of her decked out in next to nothing. Credit good genes and a regular exercise program with keeping Rihanna fit and ready to make waves by the beach. She may have been born in Utah, but dancer/singer/actress Julianne Hough looks every bit the part of a California girl. Hough, with her toned abs, glowing tan and blond locks, was tailor-made for string bikinis. {relatedarticles}It doesn't hurt that she spends most days dancing or being active on the beach with her friends. 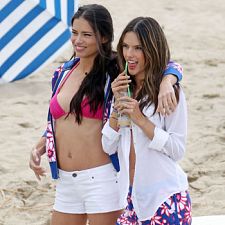 Having two kids hasn't stopped model Adriana Lima from dropping jaws in her beach-ready wear. The Victoria's Secret model gave birth in September 2012 and was ready to strut the runway just weeks later for the Victoria's Secret Fashion Show. {relatedarticles}

When she hit St. Bart's in May 2013, her itty-bitty green bikini left little to the imagination, setting off a flurry of “bikini shot of the day” blog posts. Lima credits hours (upon hours) of intense daily cardio exercise for her ability to bounce back after baby number 2. Her trainer-led sessions include jump rope, boxing and sculpting moves. Her diet, meanwhile, is heavy on steamed veggies and light on sodium and sugar. 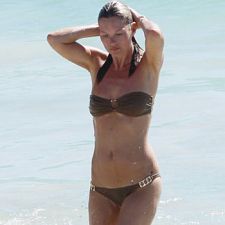 She may be pushing 40, but Kate Moss still knows how to work a camera lens. The veteran supermodel and her hot celebrity bikini body remain a frequent subject of photographs, both candid and posed. Proving she's not afraid to lose the bikini altogether, Moss appeared this summer in an ad campaign for St. Tropez sporting nothing but her birthday suit. {relatedarticles}

While Moss initially made a name for herself as the It-Girl waif of the '90s, she now sports a more filled-out – but still perfectly fit – frame. Her favorite way to maintain her figure is via Jivamukti yoga, an active form of moving mediation set to eclectic music.

These sexy ladies prove that there's no one-size-fits-all when it comes to hot celebrity bikini bodies. Surf's up – it's time to hit the beach.