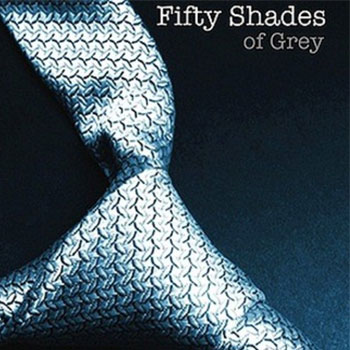 While there's no denying that the majority of men have a voracious appetite for most things sex-related, it's always been a gray area for energy-sapped women who seem to search for any excuse they can find to avoid intercourse. But thanks to "the book," there's a hot new remedy for those "headaches."

At its inception, the Twilight-inspired book was entitled Master of the Universe and published on fan fiction websites. But because of its racy nature, it soon found a home on the author's own website FiftyShades.com. The book was distributed as an e-book but due to its overwhelming success, it was marketed as a print-on-demand paperback by The Writers' Coffee Shop.

While it might seem that most women would shy away from a book that glorifies whips and chains, it's actually had the opposite effect on the ladies. Even women who don't typically find the time to read can't peel their eyes away from the pages of this groundbreaking literary work. Perhaps the biggest push for 50 Shades of Grey has been the virility as it spreads via word of mouth. Like anything, the reviews of the most-talked about book in the world are a mixed bag.

Of course, even readers differ on their opinions of 50 Shades. Some may love it. Some may hate it. But they all know it, which is ironic considering that much of the X-rated content is beyond most women's wildest dreams.

Kim J. of Coral Springs, Florida was one of millions who was encouraged by friends to get her copy of the books. Although she's typically a fan of comedic romances or mystery fiction, the avid reader kept an open mind about the genre that was relatively new to her. And it goes without saying that 50 Shades proved to be an eye-opening experience for the mother of three.

"When I got to the revealing part, I was flabbergasted," the 41-year-old corporate secretary tells MyDailyMoment.com. "As I read on, I liked the book. I found books two and three to be much better reads than the other one. They had more of a storyline. Book one was all about the sex, and while books two and three had plenty of it, they had a real storyline."

Says Jenn K., "What a complete waste of time. I wasn't shocked at the sex or the storyline, I was shocked at how terribly written it was. The author actually managed to makewild sex seem tedious. And every single description of food or wine was 'delicious.' Are you kidding me? There's not another adjective she could have come up with?"

She adds, "After the first one ended with a total thud, my friend convinced me to read the second book. Reluctantly, I did, but I have to say I forced myself to finish it. I would not let this dumb book defeat me.I couldn't stand Ana or Christian by the end of it. And please don't tell me Kristin Stewart will be cast in the movie version - although maybe she's the right choice, so the movie can be as dreary and uninspired as the book."

"The writing in general wasn't anything spectacular if you're looking at it from a writer's view," says Janet B. "It kept my interest, but I don't read those books because the grammar or punctuation is good. That's not why anyone reads those kinds of books.


"When people say it's grammatically horrible, they're reading it for the wrong reasons. It cracks me up when people comment on the writing."

"They didn't go into the erotica as much. They talked about the playroom and such but they didn't get into the entire lifestyle the way other erotica books do. She just touched on it, which is why mainstream housewives like it so much. She touched on it, but it wasn't really that intense."

Regardless of how women feel about the book, it's hard to deny its role as an aphrodisiac. Vivica H., a 30-year-old New York sales director, says that before she turned to 50 her bedroom activities had become tiresome. In an effort to spice up her sex life, she began reading excerpts of the book to her fiancé. It wasn't long before they were role-playing Ana and Christian.


Vivica admits she's also become more open minded about experimenting with some of the sexual play in the book such as using ben waballs, getting bound by something other than handcuffs and using riding crops, whips made of braided leather. All in all, she says she has the book to thank for a more lively sex life.

Vivica is in good company. There has been plenty of buzz about this startling sexual reawakening that's occurred. According to Kerner, it's a very, very good thing for couples. While they might not go to the great lengths that the characters in 50 Shades of Grey do, it's obviously serving as some serious inspiration.

Kerner explains: "You hear about 50 Shades pregnancies. I've spoken to a lot of women who have gotten their husbands reading it or they're reading it together. It's safe to say it's heating upaction in the bedroom. I don't know that couples are going out to enact thescenarios in the submission and domination aspect. But it's turning couples on and they're having more sex. I think some of them as a result are interested in exploring and dipping their toes into the shallow waters of kinkier sex."


So why does it take a book to transform women from cold fish to naughty nymphs? Kerner points out that many women begin seeking sexual adventure. The other aspect is that people get stuck in low-libido or sexless marriages where there is no time for intimacy. Unlike grocery shopping, laundry and other responsibilities, sex isn't something that's at the top of their to-do lists.

"50 Shades of Grey makes it top of mind for many women who were somewhat shut down sexually. They had kids. Sex is no longer a priority and they don't think about it. 50 Shades of Great gets them in the habit of thinking, imagining and fantasizing about sex and that's really healthy."

For the reader looking for erotica lite, it's all there in black and white... and grey of course.