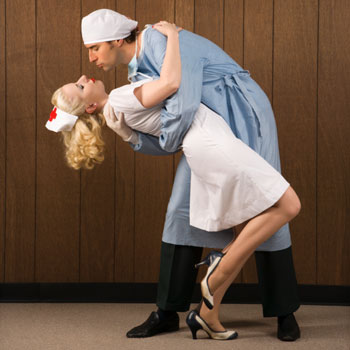 Role playing can turn a drab, ordinary sex life into a passionate, exciting one in just one night. It's amazing what dressing up and acting like someone else can do to you -- mentally and sexually.

When you role play, you remove yourself from reality. You and your partner get to be other people. You put yourself in a world that you have never been in and may have only dreamt of.

This escape from reality is what enables you to let go of your inhibitions enough to let loose and materialize your fantasies.

The better your costumes and storylines, the more exciting sex will be. Check out some of these best-dressed ideas for your next role-playing sex session.


The Prisoner and Prison Guard

A prisoner trapped in a cell for years with no sexual contact meets a sexy prison guard. The guard makes demands of the prisoner, such as a strip search, with some teasing and flirting, which sparks sexual tension.

Use an orange or classic black and white prisoner outfit for him and a tight, revealing cop costume for her. You can usually find these costumes during Halloween; however, if it's out of season, you can also find them in sex shops or online.

Think accessories to enhance the experience, such as handcuffs and a baton. You can handcuff him to the "cell" to have your way with him.

A sexy repairman comes to the door with his flannel shirt half-undone, with his tool belt around his waist. The client has on a sexy mini-skirt with a low-cut shirt. As he works on your plumbing, bent over the pipes to show off his assets, the client bends over to hand him the tools he needs.


Seduction is what counts here. The more you bend over him and he shows himself off, the more steamy things will get for both of you.

You can do this role play with many different types of service people, such as a pizza delivery guy and lawn care boy. Just switch up the outfits accordingly.

A trucker can be on the road for months, which could mean he's sexually deprived. As a sexy waitress at an overnight diner, you can help him with his sexual frustrations.

Don't think of the dirty trucker with this role play. Instead, he's the sexy trucker with his tight jeans, flannel shirt half-unbuttoned and a cute hat on his head.

Play the entire story out. He comes in, wanting coffee, pie and conversation. You, as the waitress, lean over the counter with your low-cut shirt showing off your chest as you listen intently and pat him for comfort on the arm. Pouring coffee consists of bending over him so he has nowhere to turn his head but towards your chest.

Having a sexual experience with a bubbly, flexible cheerleader is on most men's fantasy list. Dig out your old cheerleading outfit or purchase one. Make sure it's tight and you do your hair up with tendrils coming down to make it look sexy. Act out being a cheerleader to show off how you can bend.

If you think sports players are sexy, think of one your man can dress up as so you can fulfill the whole cheerleader with sports player scenario.

Find a belly-dancing outfit at a dance shop or sex shop. You can also find many accessories like sheer cloths, chiming bracelets, veils and music.

Have him sit down and just watch you as you shake your body around him, on him and over him. Pass the cloth over his face, wrap it around his neck to bring him closer to you, or make him follow you by grabbing onto the cloth as you lead him to the bed.

Have him dress up as a sexy photographer. For example, he could wear a white button-down shirt with a few buttons undone and some black slacks. Make sure he has a camera with him.

You can do one of two things with this role play. You can dress in a bikini and have him take pictures of you or you can be naked. It all depends on what scenario you want - swimsuit model or Playboy model.

As you strike a pose for the camera, flirt with him a bit to show off what you've got. He can really get into it by telling you to do different things he thinks will look good on camera.

This is a common fantasy because nearly every male student has at one time had a crush on an attractive teacher. Put a sexy teacher outfit together by wearing a tight, short skirt and body-forming shirt. Pull your hair up in a bun and find some non-prescription glasses to wear.


If you want to be the sexy student, you can do something similar. Just find an outfit that shows the most skin and enhances your most flattering attributes. Put your hair up in pigtails and wear just a little makeup to keep the innocent look.

Once you're dressed, it's time to play the part. You may be a teacher scolding your bad, bad student, or you may be the innocent school girl who is in love with her teacher and wants to show off for him a bit.

How to Make Role Playing Effective

Sexual role playing isn't just about dressing up. It's about getting into character. When you are playing the parts, you need to make it believable. That's what makes it so real and an escape from reality. If you still believe you are you, then you don't get the same excitement because your insecurities prevent you from really experiencing sexual satisfaction.

The first time you do this, you may feel awkward or ridiculous, but as you get into it, you'll start to feel how enticing it can be. You'll feel yourself let go and get into the role of being seduced or seducing your partner. Then the rest is just allowing yourself to relieve the sexual tension you both have developed from it, which is quite satisfying and fulfilling.