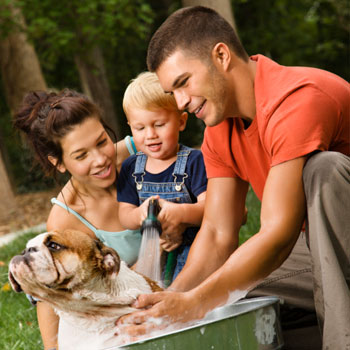 Being a parent can be chaotic enough, but having a spouse who's reluctant to help with the kids and chores can really up the stress meter.

Dividing chores and responsibilities is one of the challenges of living with a partner, and not surprisingly, it's one of the things couples bicker about the most. While most of us are far from perfect domestic goddesses, we usually get the job done. Meanwhile, our men are more likely to shirk their domestic duties or complain about having to perform them.

It's one of the top complaints of women everywhere, and it's easy to see why.

It's no mystery why men aren't usually very enthusiastic about household work. Despite decades of feminist progress, women are still expected to be the household cooks, cleaners, and babysitters. When was the last time you saw an advertisement for a cleaning solution or a mop that showed a man using the product? Of course, not all families fit the stereotype. If you're a woman whose husband happily bathes the baby, does the dishes, and dusts the figurines above the fireplace, awesome! There have always been men who are glad to help around the house, and there always will be. Hopefully as tasks become less associated with gender, couples will share more of the household work, and encounter less strife. Until then, what's a mom to do?

The Direct Approach. Sometimes, a woman may hope, pray and hint that her husband would help around the house, but won't just go ahead and ask. You might feel that if he wanted to help, he would have done so already, but that's not necessarily the case. Maybe he grew up in a family where the chores were divided in a traditional gender-based way and just assumes that housework and child-minding are your thing. Possibly, he doesn't want to intrude on what he sees as your space or do something wrong. Perhaps he's just being a bit lazy and trying to stay below the radar. You'll never know until you ask.

Bargain/Barter. You shouldn't have to bargain with your spouse to get a helping hand around the house, but sometimes that's what you need to do to get the situation to go your way. When you're having the conversation about chores, offer him something he likes in return for his help. Does he want to watch the game in peace on Sunday afternoon? Offer to get the kids out of his hair during that time so that he can relax. In exchange, he cleans up after dinner a few nights that week while you relax. Whatever you offer, make sure it's realistic and that it won't cause you more stress and inconvenience than doing all the housework yourself would have.

Be the Boss. Since you've been in charge of what gets done around the house up to now, you should give your husband some guidance about what actually needs doing. Men tend to enjoy tackling big projects, so if you ask him to clean, you might get more than you bargained for. You could find him undertaking a major de-junking in the garage when all you needed was for him to wipe down the counters.

Don't Nag. Any man will tell you that nagging triggers their internal ignore button. If he's helping around the house, don't follow him around or criticize the way he's cleaning or what snacks he's giving the kids. It may not be up to your high standards but at least he's giving it a shot and he'll likely improve over time. Don't forget to give him some praise and encouragement. Positive reinforcement isn't just for the kids. {relatedarticles}

Negotiate. Hardly anyone loves doing chores, but everyone has a chore or two they prefer over others. If there's a particular task he really hates to do, but you can live with, take it for yourself and give him something he can handle. Talent also comes into play. Let's say you're a great organizer and he's the king of scrubbing surfaces to a high shine. Divide chores accordingly. It might help to implement some kind of chore wheel or chart that clearly indicates which chores fall to which family member.

It's an unfortunate truth in our society that housework is considered menial labor unworthy of respect. When you think about it, housework is vital to the health and welfare of a family, and should be appreciated as such. Similarly, childcare is a hugely important job with heavy responsibilities, but is generally done for low or no pay and hardly any recognition. When you think about it, it doesn't make much sense.


Whatever beliefs and biases regarding housework exist in society, your family can buck the system and do what works for you. By communicating, working together, and compromising, you can come to a liveable agreement that everyone can stick with. That's how a team works.

An added bonus to sharing household tasks is that you'll be setting a good example for your children. Kids who see mom and dad engaging in everyday chores together will learn a lot about co-operation and will be less likely to assign certain tasks by gender. Your son's future wife will thank you, and so will your daughter.