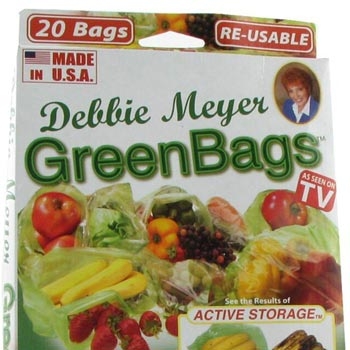 Should you go green? That is the question. We're not talking about a quest for conservation. We're talking about the heavily-hyped Debbie Meyer Green Bags that are supposed to increase the longevity of fruits and vegetables. So do they really work? We put these bags to the test.

My husband and I run our own business and keep an incredibly busy schedule. As such, neither one of us has time to shop for fresh produce on a daily basis. This can be rather challenging in that I am a vegan who consumes most of what I eat raw, and my husband is a vegetarian who is also very accomplished athlete and thus requires a lot of food. I first learned about the Debbie Meyer Green Bags from another mostly-vegan friend. "You're the scientist. Put them to the test!" she said as she handed me the bags. "I swear by them, things are supposed to last for a month in these bags. Just figure it out and test, test, test!"

I understand that the Green Bags are advertised on television; I never saw the commercials nor did my first bags come with product instructions. A double-blind study, according to my friend. She knew by appealing to my curiosity, I would test the shelf life of literally every fresh or raw thing we ate at home.

The Green Bags, I have learned, are advertised as being capable of keeping produce fresh for up to 30 days. When my friend had first told me that her non-organic and organic produce were lasting at least a month, I didn't believe her yet found this claim fascinating enough to challenge myself.


Organic produce tends to quickly spoil as it is generally not treated with preservatives or chemicals, nor is the produce usually covered with wax. Organic produce also ripens very quickly and either has to be consumed or frozen before it goes bad. Keeping up with ripening schedules in a vegetarian household is not always an easy task, especially when you run your own business or keep the kind of hours we do.

The theory behind the bags is simply that they absorb ethylene gas from the produce. Plants use ethylene as a hormone and one of its actions is to ripen fruit. If you can reduce the concentration of ethylene around a banana, for example, it shouldn't get over-ripe and mushy as quickly.

Ripening is not necessarily what causes spoilage in produce. Berries usually develop mold long before the fruit itself goes bad and may even spoil before becoming ripe.

Do Green Bags work? I have found that, in our household, they do. Again, however, we do buy organic, start with good, fresh food, and thoroughly wash the produce before it goes into the bag. We also let things ripen outside of the bag first, although we have, while traveling, put bananas into a bag while they are still a bit green.


We place produce inside the bag with a dry paper towel (to help alleviate condensation), and twist the bag loosely to close. For most everything besides bananas, avocados or tomatoes, we store the bag in the refrigerator. I don't mix the vegetables or fruits within the same bag, though on occasion my husband does and there has not been a considerable difference.

Most of the produce we store in the Green Bags stays a maximum of two weeks in the bags.

We've had good results with Green Bags with most types of produce. Celery and carrots seem to last quite well, as do apples and most peppers. I harvested several dozen jalapeno peppers from my garden this summer and gave several bags to friends. The group consensus is that the peppers lasted a maximum of approximately eight weeks refrigerated, and kept in the bag.

I also have an ongoing experiment wherein we placed a large bowl of cut wheatgrass inside one of the Green Bags. The wheatgrass is still green, smells good, and isn't moldy after nearly ten weeks.

The downside for us is that the bags are a bit of a hassle to wash and re-use. Other than that, I've not only purchased a number of these bags to use at home, I've purchased them to share and as a gift to others. I highly recommend them.