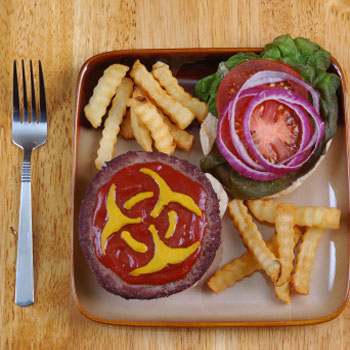 "When in doubt, throw it out…"

If that's the extent of your knowledge when it comes to food safety, then it's about time you get educated.

With an estimated 128,000 hospitalizations and 3,000 deaths annually, foodborne illness is something to take very seriously. The Centers for Disease Control and Prevention estimate that up to 48 million people are sickened each year when they consume food infected with bacteria, viruses or parasites.{relatedarticles}

Obviously, food safety is no joke, whether you're home preparing a meal for your family, picking up takeout or grabbing a doggie bag at a restaurant.  You can reduce your risk of infection, regardless of who prepared your food and where you ate it, by taking a few precautions.

"Almost half – 45 to 50 percent – of foodborne illness occurs in foods prepared in the home. Restaurants, markets and even produce are responsible for the rest. In fact, up to 20 percent of foodborne illnesses are related to produce," food safety expert Jeff Nelken, said. "Foods such as cantaloupe, spinach and peanuts are responsible for many cases of contamination."


Food safety starts at home, where you can decrease you and your family's risk of contracting a foodborne illness significantly. The CDC's new, four-step process helps consumers ensure their family's meals stay safe.

A few more tips on how to chill – and we're not talking about relaxing. A food thermometer isn't the only temperature gauge you need in your kitchen. Nelken advises every home to have a temperature gauge in the refrigerator to ensure foods stay at 40 degrees or cooler. This temperature is the safest for foods, and up to 85 percent of household refrigerators don't have them, Nelken says.


The location where foods are kept in the fridge matters as well. Foods that are kept in the door of the refrigerator can be 5 to 7 degrees warmer than other foods, Nelken says. It may not seem like a big difference, but when you consider the fact that many people keep sensitive foods such as eggs and milk in the door, it's a recipe for sickness. "Every time you open the refrigerator door, the food inside gets a blast of heat that raises the temperature," he adds.{relatedarticles}

"Leftovers are a major source of foodborne illness. This occurs when people leave foods at a temperature I call the 'danger zone,' which is from 41 to 135 degrees. At the 70-90 degree range, bacteria can double every 20 minutes," Nelken says.

Leftovers should not be put in the refrigerator immediately after cooking. If they're still hot, it will take longer to get cool, and food will stay longer in that bacteria "danger zone" of 135 degrees and lower. And putting it in a sealed container actually locks in the heat. Nelken's suggestion -- put the food in the freezer for up to 30 minutes to stop the heating process and cool it more quickly. Large portions should be separated into smaller containers to distribute heat.

"Some people think putting food in the fridge makes it safe, but the refrigerator doesn't kill bacteria. It may slow it down, but it's more like bacteria hibernating for the winter," Nelken says.


Nelken advises against storing meats and takeout foods on the top shelf of the fridge, lest they drip on produce such as salad and contaminate it. Leave meats in their plastic grocery bags and keep takeout containers in their bags to contain any leakage.

It's important to get perishable foods to the fridge as soon as possible after buying them. Take food home from the grocery store within 20 minutes and refrigerate perishables to stop the spread of bacteria. Or keep perishable foods in thermal bags with ice packs. Keep in mind that food can reach that danger zone of 41-135 degrees very quickly in a hot car.{relatedarticles}

Speaking of bags… For those of us who bring our own reusable bags to the grocery store, Nelken is finding that they pose a surprising bacteria risk.

"For people who bring their own bags to the market, we're finding that bags left in cars have high bacteria counts. Cloth bags are a perfect medium for growing high bacteria levels. To avoid bacteria buildup and transmission to other foods, throw the bags in the washing machine or sanitize the inside of the bag once a week," he says.


Wondering how long that food should stay in the fridge until it goes bad? The "sniff test" isn't always the best way to tell, Nelken says. "The 'ick' factor – outward signs of spoilage such as smell and sliminess – are obvious and are nature's way of warning you not to eat it. However, you can't see bacteria." Use the following rules of thumb from FoodSafety.gov for tossing expired food. {relatedarticles}

The refrigerator is the best place to defrost foods as well. Nelken cautions consumers never to thaw food on the counter or in the sink. Doing so not only allows the food to remain in that "danger zone" temperature range long enough for bacteria to multiply, but if juices from the food spill, they can contaminate other foods left in the same place.


When you're ready to heat up these dishes, what are the best ways to avoid getting sick? Temperature, once again, is key. The number to remember when heating leftovers and meats is 165. This is the temperature at which the most lethal bacteria, including salmonella, are killed.

When reheating foods in the microwave, stir frequently during cooking and allow hot foods to sit for two minutes after their cooking time in order for the heat to distribute evenly. Use a thermometer to ensure that food has reached 165 degrees all over, not just in the middle or on the edges.{relatedarticles}

So what are the food poisoning culprits, and where else might you find them? First, a few stats. The most common pathogens that could make you sick include the norovirus, which causes nausea and diarrhea. Foods commonly involved in a norovirus outbreak include leafy greens, fresh fruits and shellfish. But the norovirus commonly passes from person to person when the infected prepare food or drinks or when people touch surfaces contaminated with the virus. A norovirus infection may make sufferers feel terrible, but the good news is that it usually isn't lethal unless dehydration occurs.


Salmonella is another common cause of foodborne illness. According to the CDC, it was responsible for the most hospitalizations and deaths of any other foodborne illness in 2011. While eggs and poultry cause many salmonella illnesses, they aren't responsible for all of them. Salmonella can be found in ground meat, fruits, vegetables and even some prepared foods such as TV dinners. And salmonella might cause even more illness than we know of – for every person who seeks medical attention and has their illness confirmed by a laboratory, there are an estimated 30 sickened by salmonella who don't report it.{relatedarticles}

In fact, the CDC urges you to report any suspected incidences of foodborne illness. Contact the local health department – they need your help in the event of an outbreak.

The second most lethal foodborne illness is toxoplasmosis, which can be found in undercooked, contaminated meat (especially pork, lamb, and venison). Toxoplasma gondii, a parasite, is what causes illness, which has an incubation of up to three weeks, making it difficult to trace back to a certain cause or type of food. Toxoplasmosis was responsible for 4,428 hospitalizations and 327 deaths in 2011.

The bacteria Listeria is the third-leading cause of death when it comes to foodborne illnesses. About 1,600 people are sickened each year, and 255 people died of listeriosis in 2011. It's found in unpasteurized dairy products such as milk and soft cheeses and cold deli meats and hot dogs.


Smoked seafood and occasionally produce will cause an outbreak as well. Particularly at risk are pregnant women and their fetuses – listeria can cause miscarriage, stillbirth and newborn death. "Listeria in pregnant women will abort the fetus in 35 percent of cases," Nelken said.

So how do you know whether you were sickened by something you ate or something else?{relatedarticles}

People at high risk of food poisoning include the very young, very old, pregnant women or immune-compromised individuals, such as those with HIV/AIDS or those undergoing chemotherapy. By avoiding certain types of food – or at least cooking them extremely well – many cases of food poisoning can be avoided. At-risk groups should eschew soft, unpasteurized cheeses, undercooked meats – including sushi, and anything that contains uncooked or undercooked eggs. That means no cake batter, cookie dough, or over-easy or sunny-side-up eggs.


Even healthy people should take measures to avoid getting sick.

And most important, wash your hands. Keep yourself and your loved ones safe and their tummies safely full by knowing how to avoid foodborne illness.

To learn more about Jeff Nelken and how to keep your kitchen safe, visit www.foodsafetycoach.com.